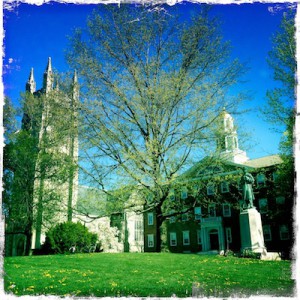 The leaves are starting to turn in the Berkshires, and migratory frosh will be unloading their parents’ cars in front of the Freshman Quad in a matter of days.

Meanwhile, work on New Sawyer Library is moving forward at a furious pace. The building will reach substantial completion early in 2014, although final move-in won’t take place until late June. If you look through the construction images, you’ll see that one of the most delightful features of the project is the substantial restoration of Stetson Hall, one of the College’s iconic buildings.

This issue of ANSO News is likely to be the last in this format. The department expects that our site will receive the same WordPress makeover that nearly all of the Williams College website has undergone over the past 18 months. We are likely to replace ANSO News with a running news link that will allow us to provide news to alumni and friends of the department on a regular basis. We expect that all sixteen years of ANSO News will be archived somewhere in the new website.

Whatever the state of the ANSO website, we continue to welcome news from and visits by former students. Let us know what you’re up to.

The department is sad to report that Bob Friedrichs, longtime chair and founding sociologist at Williams, died in the fall of 2012 at the age of 89. A brief obituary can be found here. The department’s annual award for excellence in sociology is named after Friedrichs.

Antonia Foias, Professor of Anthropology, had quite a year. Not only did she win another major NSF grant to further her archaeological work in Guatemala, she published two books, adding two more outstanding titles to ANSO’s ever-expanding book/film list.

Department Chair Olga Shevchenko has just published “From Everyday Life to Photographic Visions of Socialism, or How One Thing Leads to Another” in Anthropology News, the online newsletter of the American Anthropological Association.

Michael F. Brown represented Williams on an alumni trip to Peru in June 2013. During the trip, he and a number of alums were able to visit the gravesite of the explorer and natural scientist James Orton, Williams Class of 1855. Orton died while crossing Lake Titicaca at the end of his third expedition to South America in 1877. The monument shown in the photograph below was placed on the grave in the early 1920s by grateful alumni of Vassar College, where Orton served as a professor of natural history at the time of his death.The monument is located in Esteves Island, a small island just off the shore of L. Titicaca in the outskirts of Puno.

Orton is honored at Williams by the Orton Award, given annually to a graduating major for excellence in anthropology.

News about Students and Alumni

Annual student awards for the Class of 2013. The James Orton Award in Anthropology went to Paul J. Garofolo. The Robert Friedrichs Award in Sociology was awarded to Sarah L. Freymiller.

Alums on campus in recent months. Michael Brown was happily surprised by recent visits by Scott Moskowitz ’05, currently doing doctoral work in Sociology at Princeton, and Freeden Oeur ’03, who is putting his Sociology doctorate to work in the Department of Education at Tufts. An article by Scottwas just published in the magazine Foreign Affairs, although it appears to be protected by a paywall.

Liz Hoover ’01 recently joined the American Studies faculty at Brown University. She was photographed at Williams during a colloquium on the experiences of minority undergraduates who have gone on to seek graduate degrees in the humanities and sciences.

A comment by Bürge Abiral ‘11 on the current political upheaval in Turkey has been posted on the ANSO site as the first of what we hope will be occasional alumni contributions that we’re calling “Letters from the Field.” Don’t miss it!

Below are some random shots taken at the department’s annual end-of-year party in the Faculty Club in May 2013.