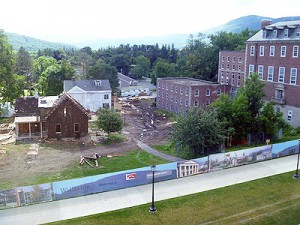 It’s construction time again at Williams–now in full view of the east-facing windows of the department’s new home, Hollander Hall. The president and trustees approved reactivation of plans for the construction of the new college library and IT center.

What that means for ANSO, aside from construction noise, is a view that on July 31, 2011 looked like this:

To the left you can make out the bones of Seely House, which is being disassembled and mostly recycled. Just behind it is Kellogg House, former home of CES, which will become a new, improved, green CES in a few years. To the right is Stetson Hall, the original 1923 part of which will be conserved and renovated for the new library.

There’s more to Williams than construction, though, and this issue of ANSONews tries to give you a sense of what ANSO’s ongoing contribution to Williams life has been over the past year.

News about the Faculty

Olga Shevchenko, Associate Professor of Sociology, has been awarded an ACLS Fellowship for her research project “The Afterlife of Socialism in Russian Family Photographs.” She will be spending the next academic year at the Collegium Budapest in Hungary, where she has been invited as a Eurias fellow. Some of the raw material for her research may be sampled via the Williams-based website Letters from Pioneer Camp.

Kim Gutschow, Lecturer in Anthropology & Religion at Williams, also holds an appointment at Goettingen University. She has been named Associate Professor and Chair of the Anthropology of Public Health track there.

The fly-fishing faction of ANSO has expanded of late. Michael Brown is a newbie, but a more distinguished addition is Nick Howe, Assistant Professor of Environmental Studies (an affiliate in Sociology), a cultural geographer and fly-fisherman extraordinaire.