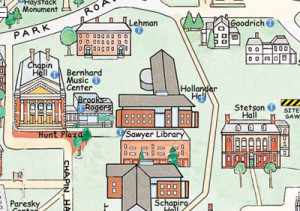 The Anthropology and Sociology majors continue to boom at Williams, with nearly 50 juniors and seniors having declared majors in one or the other discipline. Meanwhile, ANSO’s new home, the North Academic Building, finally received a proper name: Hollander Hall. Hollander has landed in the online campus map, and you should be able to recognize its distinctive profile here:

Hollander and its counterpart on the other side of Sawyer Library, Schapiro Hall,were both certified as LEED Gold buildings, meaning that they meet high national standards of energy efficiency and sustainability.

As ever, we welcome news from our far-flung and increasingly numerous ANSO alums!

For the first time in years, ANSO managed to get most of its faculty together in one place for a group portrait, and a jolly group it was on a fine day in April. From L to R: Antonia E. Foias, James L. Nolan, Jr., David B. Edwards, Michael F. Brown, Peter Just, Arafaat Valiani, and Olga Shevchenko. Missing: Robert Jackall, Kim Gutschow, and Nadia Loan.

Arafaat Valiani. Assistant Professor of Sociology, contributed an essay to an online series commemorating the 2008 terrorist attack on Mumbai. The journal Cultural Anthropology plans to publish an interview with Professor Valiani in its webstie to supplement his article, “Physical Training, Ethical Discipline, and Creative Violence: Zones of Self-Mastery in the Hindu Nationalist Movement.”

Olga Shevchenko, Associate Professor of Sociology, was awarded the 2009 Heldt Prize for the best book by a woman in any area of Slavic/East European/Eurasian studies for her book Crisis and the Everyday in Postsocialist Moscow (Indiana University Press, 2009). Olga also organized and chaired an international symposium, “Visible Presence,” at Williams College’s Oakley Center for the Humanities & Social Sciences in late April, 2010.

Robert Jackall, Willmott Family Third Century Prof. of Sociology & Public Affairs, was interviewed on the occasion of a 25th anniversary reprinting of his much honored book Moral Mazes.

The Mellon Foundation has awarded Antonia Foias, Professor of Anthropology, a coveted “New Directions” fellowship, which will allow her to develop new professional skills in the area of GIS technology.

Legal Accents, Legal Borrowing, the most recent book by James L. Nolan, Jr., ANSO Chair and Professor of Sociology, continues to garner positive reviews, including this one from the Law and Society Review.