It’s been nearly a year since the Department moved into the new North Academic Building, and we’re still struggling to make the shift from Stetson’s dilapidation to the NAB’s sleek modernity. But the building is beginning to acquire some of the character of its occupants, as can be seen in the image below, a Día de los Muertos installation created by Latino Studies faculty and staff. This twelfth installation of ANSONews has links to some home-brewed videos, which reflects the drift of video technology from experts like our own Prof. David Edwards to the desktops of the less technically sophisticated. But we still welcome old-school letters and cards from ANSO alums–so please keep us up-to-date on what you’re doing, and we’ll try to reciprocate!

Kudos. Antonia Foias, who just stepped down as department chair, has been promoted to full professor. Arafaat Valiani, assistant professor sociology, will be a Kluge Fellow at the Library of Congress during the fall semester, 2009. Valiani also received a Hellman grant from Williams College in support of his sabbatical research project. 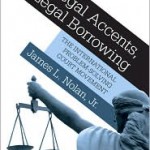 Publishing news. Jim Nolan’s latest book, Legal Accents, Legal Borrowing: The International Problem-Solving Court Movement, has just been published by Princeton University Press. The Williams press release for the book is here. It has evoked a comment or two in the blogosphere, with reviews sure to follow in the coming months.

Michael F. Brown’s chapter in Whose Culture?, a book edited by James Cuno, Director of the Art Institute of Chicago, received special mention in an online review in Spiked-Online.com, a UK publication.

The first review of Crisis and the Everyday in Postsocialist Moscow (Indiana University Press), by the department’s Olga Shevchenko, assistant professor of sociology, has just appeared online. Olga is working with Cameron Nutting on cleaning up a database of Soviet family photography and putting together a website of young Pioneers’ letters home from summer camp. For alums who read Russian, another recent publication by Prof. Shevchenko can be accessed here.
News from former Bolin Fellows. The Department recently heard from Nicole Castor, who has just finished her dissertation, Invoking the Spirit of Canboulay: Pathways of African Middle Class Cultural Citizenship in Trinidad, at the University of Chicago. And J. Lorand “Randy” Matory, currently at Harvard, has accepted chairmanship African and African-American Studies at Duke, a department that, according to press reports, Matory aims to turn into a powerhouse of African-American scholarship.