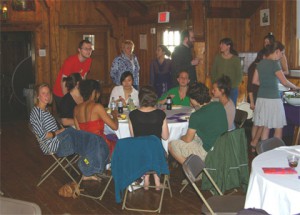 Yes, it’s . . . The Log! Not the sleekest building at Williams or the most attractive, but for alums this is one of the college’s most recognizable venues. The image of ANSO staff and majors at one of the last department events of the 2007-2008 academic year year will therefore have a timeless quality for some readers. But don’t be deceived: in a few weeks ANSO, as well as most of the other Div. I and II departments at Williams, will be moving into new quarters as Phase I of the Stetson-Sawyer Project approaches completion. 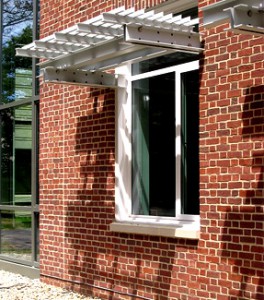 For the first time in Williams history, the college will have a proper archaeology lab. There will also be 160 new offices and a number of new classrooms and public spaces to replace the scruffy office complex in the rear of Stetson Hall. Few of the faculty will miss those those 6′-7″ high ceilings and dark corridors.

In keeping with a new architectural era, ANSO has experienced explosive growth in the number of majors: an astonishing 100 percent increase between the Classes of 2009 and 2010.

Feel like revisiting one of your Williams archaeology classes? Check out this streaming video lecture by Professor Antonia Foias, “Politics, Economics & Power in Ancient Mayan Civilizations,” given at Reunions, June 2008. 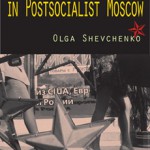 Olga Shevchenko, Assistant Professor of Sociology, has returned to teaching after a sabbatical leave, part of which was spent in Russia. Early next year her book Crisis and the Everyday in Postsocialist Moscow (Indiana U. Press) will hit the bookstores. But you can download an order form by clicking here. Olga’s most recent fieldwork in Russia is described here.

In February 2008, Michael Brown gave a keynote address at the conference “From Anatomic Collections to Objects of Worship” organized by the Musée du quai Branly, Paris. You can download the entire text of the conference here, including Brown’s presentation, although you should be warned that for reasons known only to the French, texts of each talk are presented without paragraphing, which makes Brown’s look like a chapter torn from a novel by Gabriel García Márquez.

Robert Jackall edited and introduced Die Intellektuellen und die moderne Gesellschaft, by Hans Speier (Wien, Graz: Nausner & Nausner, 2007). He also presented the paper entitled “Multiculturalism & its Consequences: The case of Muslims in Europe” at the 38th World Congress of the International Institute of Sociology in Budapest in June 2008.

News about students and alumni

Award winners, 2008. This year we also managed to get a photograph of our Orton and Friedrichs prize winners as they were dressed to kill at the Senior Dinner Dance, Mt. Hope Farm. L to R: Alyse Takayesu, winner of the Orton Prize in Anthropology, and Mirza Delibegovic and Lu Hong, who shared this year’s Friedrichs Prize in Sociology.

Abby Rosenthal ’02 wins this year’s award for the most unusual public notice of a recent major . . . for her appearance on Jeopardy in March 2008. For fans of the quiz show, Abby’s stats can be browsed here.

Speaking of media, you can link here to a downloadable audio interview of Bo Peabody ’94, former Sociology major, about his experience as a successful entrepreneur at Williams and beyond.

Catherine Bolten ’98 received her PhD in anthropology from the University of Michigan in May 2008. She gave an absorbing seminar to the spring 2008Ways of Knowing class on her fieldwork in Makeni, Sierra Leone.

We received a postcard from Kristin Englebrecht Bleem, who reports that she’s living in Seattle and running a “painting/green consulting/restoration/ general enthusiast business called Eager Beaver Works,” as well as “getting people riled up about urban agriculture.” You find out more by looking at her MySpace profile.

Miscellaneous news. Katie Krause ’06 is going to start her MSc program in public health with a focus in reproductive and sexual health at London School of Hygiene and Tropical Medicine. Rachel Winch ’06 is in DC working for Jim McGovern, the chair of the House Hunger Caucus. Robin Kim ’04 is working for an urban design firm and thinking about starting a grad degree in urban planning. Jericho Burg ’87 is now Dr. Burg, having completed her PhD in Communications at UCSD. The title of the diss is Fixing Famine: The Politics of Information in Famine Early Warning.

News about the activities of ANSO alums–including those of you who pursuing non-academic careers–is always welcome!